In PART THREE of the gender series we open our eyes to our ancestors in North America, the lives they lived and the echoes of that time that still sing through to this day. Beginning again with Leslie Feinberg and their book Transgender Warriors, we position ourselves here, on the land we live on and the people who’ve lived in North America for thousands of years. 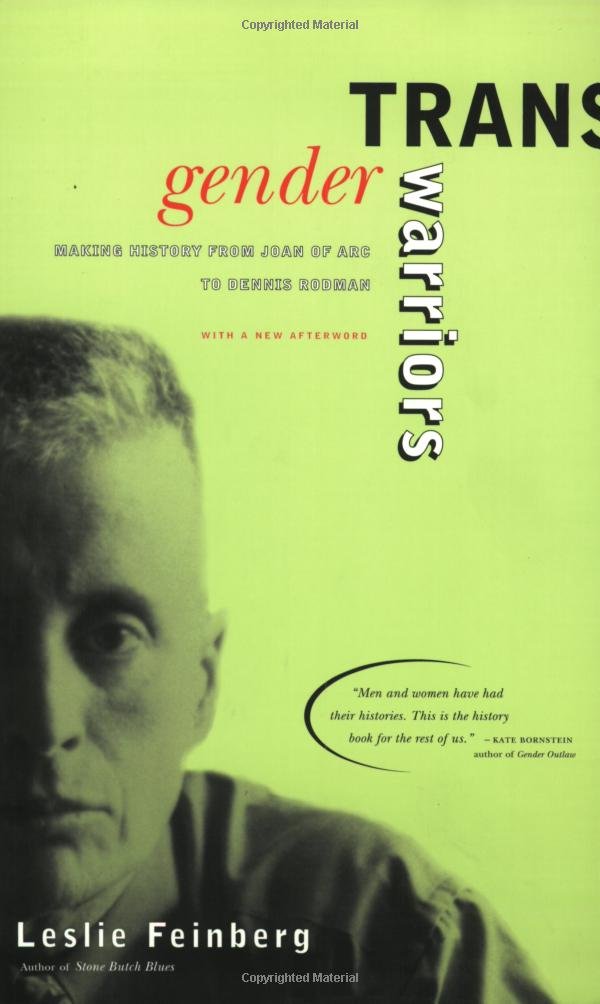 There is an undeniable strength and power that queer/trans/intersex people hold. Opening up to multicultural awareness about gender showed that the history and presence of our community is global and stretches through the expanse of time with great variation. As we look at queer/trans/intersex history here in North America we find a similar story.

We see courage, persistence and endurance. Frequently in matrilineal/matrifocal communities, we can see an inability to deny the power of nature within the self, and instead a commitment to give it expression, fluidity and freedom. Like many global cultures that acknowledge 3rd and 4th genders, multiple gender expression permeates a vast number of indigenous cultures in ancient North America.

3rd and 4th genders provide a more nature-based embodiment within a culture that supports and celebrates roles for queer/trans/intersex people. These are the kinds of roles that create connections and bridges, synthesize information and experience, and maintain expansion for their communities. Valuable roles that serve their people and time, but can also serve as a lifeline to another person at another time.

In this short video, Feinberg speaks about the moment they first found 3rd/4th gender representation. The truth in our ancestors was so clear and undeniable, it could reach through time and open Feinberg’s eyes to their own self. It was at The National Museum of the American Indian. 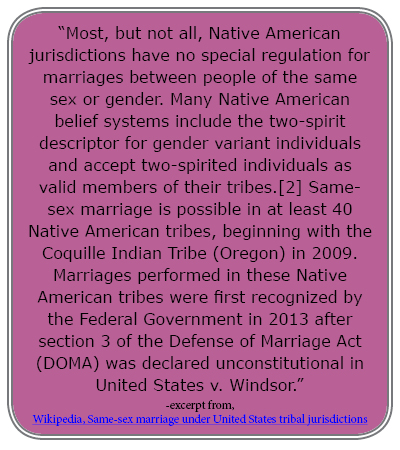 Although numerous tribes never forgot and remember to this day the presence of 3rd and 4th genders from their traditions, most knowledge about gender went underground during the time of aggressive colonization and rightly so. But when knowledge goes underground for safety and survival reasons, it is easily lost or temporarily misplaced. The fact that this knowledge was not lost and in fact could not be denied and is rising with greater strength even now, is a testament to the enduring power of queer/trans/intersex people and the positions they played in North America’s historical past.

In contemporary times, it can be challenging to step outside of the Western framework and into a more indigenous one. Western messages have become deeply embedded, even internalized, until it seems they are reality itself. And sadly much of the documentation that reflects pre-colonized perspectives are filtered through heavily biased individuals and systems. However, by putting them in context and looking with a queer eye, we can gain a valuable window back in time that can help re-frame and potentially heal the present. 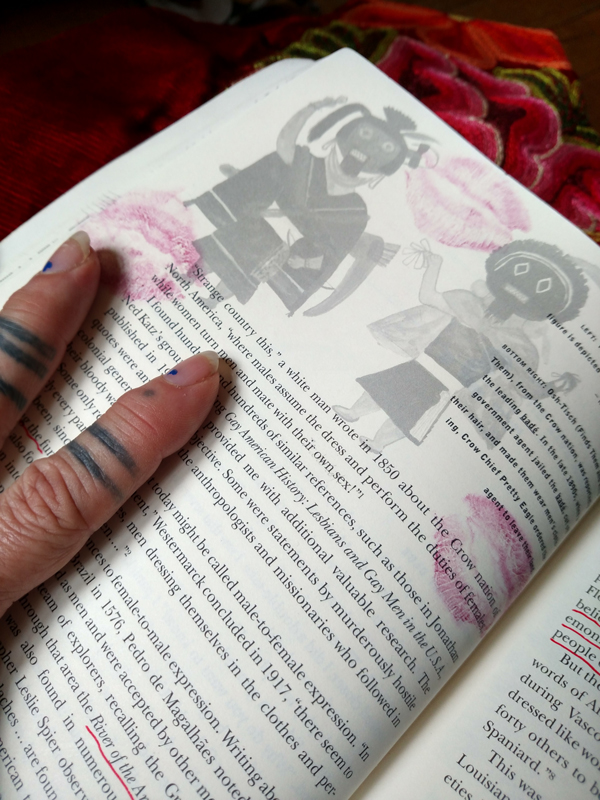 From Transgender Warriors,
“ ‘Strange country this,’ a white man wrote in 1850 about the Crow nation of North American, ‘where males assume the dress and perform the duties of females, while women turn men and mate with their own sex!’

I found hundreds and hundreds of similar references, such as those in Jonathan Ned Katz’s ground breaking Gay American History: Lesbians and Gay Men in the USA, published in 1976, which provided me with valuable research. The quotes were anything but objective. Some were statements by murderously hostile colonial generals, others by the anthropologists and missionaries who followed in their bloody wake.

Some only referred to what today might be called male-to-female expression. ‘In nearly every part of the continent,’ Westermarck concluded in 1917, ‘there seems to have been, since ancient times, men dressing themselves in the clothes and performing the functions of women…’

But I also found many references to female-to-male expression. Writing about his expedition into northeastern Brazil in 1576, Pedro de Magalhaes noted females among the Tupinamba who lived as men and were accepted by other men, and who hunted and went to war. His team of explorers, recalling the Greek Amazons, renamed the river that flowed through that area the River of the Amazons.”

Feinberg’s book fascinated me because of its range. It is a sweeping testament and holds the freedom and the beauty of containing their own personal experience and exploration as part of their documentation. 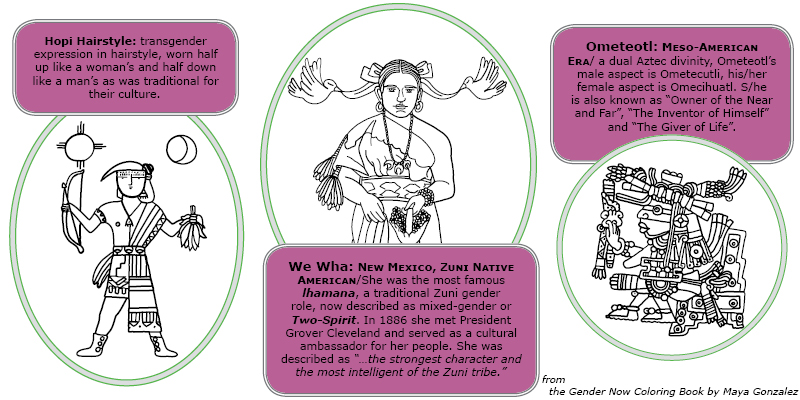 “I began to hear more clearly the voices of Native peoples who not only reclaimed their traditional heritage, but carried the resistance into the present…Two historic developments helped me to hear the voices of modern Native warriors who lived the sacred Two-Spirit tradition: the founding of the Gay American Indians in 1975 by Randy Burns (Northern Paiute) and Barbara Cameron (Lakota Sioux), and the publication in 1988 of Living the Spirit: A Gay American Indian Anthology. Randy Burns noted that the History Project of Gay American Indians ‘has documented these alternative gender roles in over 135 North American tribes.’
“I knew that Native struggles against colonization and genocide—both physical and cultural were tenacious. But I learned that the colonizers’ efforts to outlaw, punish, and slaughter the Two-Spirits within those nations had also met with fierce resistance. Conquistador Nuno de Guzman recorded in 1530 that the last person taken prisoner after a batter, who had “fought most courageously was a man in the habit of a woman….”

These books are joined by one that drops more specifically into the life and times of We’Wha. Will Roscoe’s The Zuni Man Woman was published in 1991. It won the prestigious Margaret Mead Award, as well as the Lamda Literary Award. We’Wha was the most famous lhamana, a traditional Zuni gender role, now described as mixed-gender or Two-Spirit.

Changing Ones/Third and Fourth Genders In Native North America, was published in 1998. This book contains an extensive overview documenting multiple cultures and individuals.

“In truth, the ground American society occupies once may have been the queerest continent on the planet. The original peoples of North America, whose principles are just as ancient as those of Judeo-Christian culture, saw no threat in homosexuality or gender variance. Indeed, they believed individuals with these traits made unique contributions to their communities.”

“The evidence of multiple genders in North America offers support for the theory of social constructionism, which maintains that gender roles, sexualities, and identities are not natural, essential, or universal, but constructed by social processes and discourses…”

It may not be possible to fully understand indigenous perspectives on gender and sexuality after centuries of colonization, but by turning in this direction we can begin to learn. In listening more closely and opening our minds and perspectives, we can help root a present and a future where queer/trans/intersex and indigenous people are once more treated with deep honor and respect. Our ancestors are still alive in us and on this land.

This makes it valuable to more fully understand the history of indigenous North America. Numerous stereotypes persist because of deeply biased scholarship.

One book I recommend to expand perspectives is 1491/New Revelations of the Americas Before Columbus by Charles Mann. It helps with envisioning what indigenous North America must have been like. Very different than what most of us were taught, it helps give some framework to the economic, spiritual and healing/health systems functioning at that time.

Here are videos that share some of the inclusive, indigenous genders still singing through from the ancient past into the present time in North America.

A closer look at WORDS and Native American experience

Multicultural: 4 Areas of Action
Prev
Indigenous: Imagine for a Moment
Next