WELCOME TO PART ONE: NATURE!

In PART ONE of the series we open our eyes to the natural world all around us, remembering that we too are a part of nature.

We begin by looking at two highly praised books that represent a slow and growing trend. They document the reality of animals. As a consequence they also highlight how Western culture has suppressed the truth of queer/trans/intersex expression and presence in nature. While it will take years, perhaps even decades for the professional field to create overarching academic frameworks to accommodate this shift in thinking, the information is out there now and its strength is growing.

As parents, educators and activists we can support a shift toward this kind of truth telling by keeping ourselves abreast of this developing scholarship and exploring how to put it to practical daily use, especially in the classroom and home. 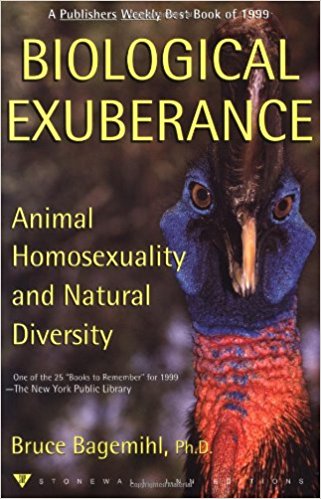 After 10 years of research, Bruce Bagemihl’s Biological Exuberance/Animal Homosexuality and Natural Diversity was published in 1999. Nature/International Journal of Science said, “This book should surely become the standard reference work for research on the topics covered.” It gathers in once place a staggering array of over 300 mammals and birds, documenting same-sex partnering and extensive gender diversity.

“The animal world—right now, here on Earth—is brimming with countless gender variations and shimmering sexual possibilities: entire lizard species that consist only of females who reproduce by virgin birth and also have sex with each other; or the multigendered society of the Ruff, with four distinct categories of male birds, some of whom court and mate with one another; or female Spotted Hyenas and Bears who copulate and give birth through their ‘penile’ clitorides, and male Greater Rheas who possess ‘vaginal’ phalluses (like females of their species) and raise young in two-father families; or the vibrant transsexualities of coral reef fish, and the dazzling intersexualities of gynandromorphs and chimeras. In their quest for ‘post-modern’ patterns of gender and sexuality, human beings are simply catching up with the species that have preceded us in evolving sexual and gender diversity—and the aboriginal cultures that have recognized this.” 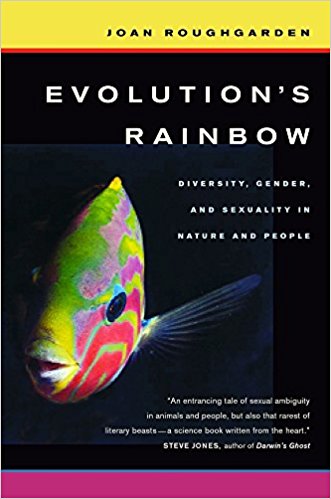 In 2004, Joan Roughgarden’s Evolution’s Rainbow/Diversity, Gender and Sexuality in Nature and People was published. Nature/International Journal of Science weighed in again saying, “As a compendium of information on sex and gender diversity in the natural world, Roughgarden’s is the richest and most authoritative book available,” making it a perfect companion to Bagemihl’s book.

“Roughgarden’s compilation shows wide variations of gender expression among vertebrates, demonstrating that several stereotypes about gender are simply incorrect, she maintains. For example animals aren’t just male or female; individuals can be both male and female at the same time or be one or the other at different times. Males are not necessarily bigger than females, and in many species, it’s not the females who give birth but rather males that incubate eggs in a pouch. And like the Bluegill Sunfish, many species have three or more genders.”

And the scholarship continues. These two books don’t reflect the work of one person, but literally hundreds of people working in their field.

A 2009 study says, “Same-sex behavior is a nearly universal phenomenon in the animal kingdom, common across species, from worms to frogs to birds, concludes a new review of existing research.”(1)

Overview of the Series
Prev
Nature: Imagine for a Moment
Next