About The Gender Wheel

The Gender Wheel is a tool and a concept first developed by Maya Gonzalez in 2010 to express the dynamic and infinite nature of gender.

The full Wheel consists of 4 moving concentric circles. The first 3 circles are the SELF: the Body circle, the Inside circle, and the Pronoun circle. The Gender Wheel Curriculum and Educational Tools focus primarily on these first 3 circles at present. The 4th circle is the SELF in Relationship and will be explored in more depth at a later time.

All circles hold infinite potential. Familiar markers are placed around each circle to show connection and flow. But, words are in constant flux and the truth is WE NEED A LOT MORE WORDS to truthfully express who we are. 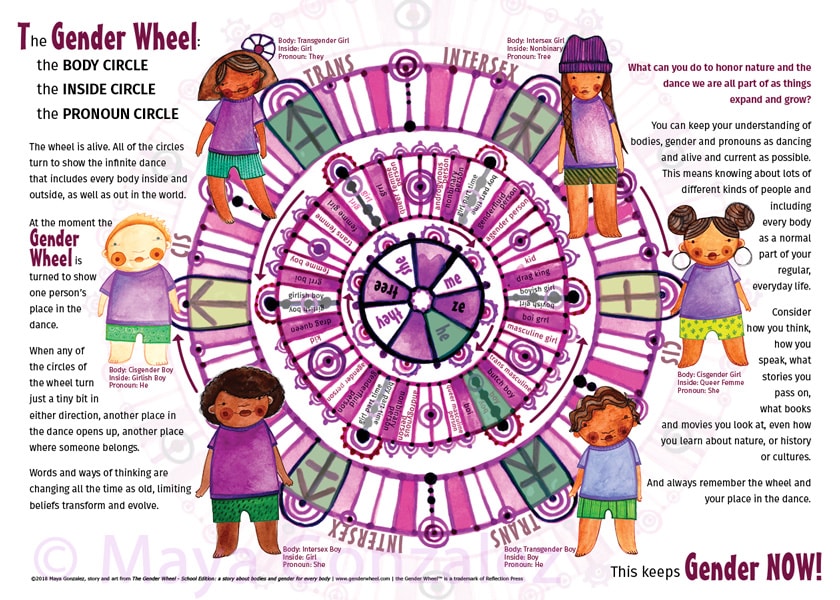 The Gender Wheel gets its inspiration from ancient Mayan and Aztec calendrical wheels, patterns of growth in nature and the infinite, nonlinear aspect of circles. Embedded within the Wheel is a perspective of gender that is holistic and community-centered. Beyond 2 boxes or a spectrum with two ends, The Wheel is a place to find yourself, see your community and know you belong in the circle.

The Gender Wheel and its circles serve as a compass and guide through the Curriculum. Every circle of the Wheel is an opportunity to expand our sense of the world around us, and our place in it.

Learning begins at the center of the Wheel with the Pronoun Circle and expands out through the Inside, Body, and Relationship Circles. We begin with the Pronoun Circle because language acquisition is key to continue fully addressing gender in our current culture. We must establish more and more respectful and inclusive ways of speaking to one another.

Maya first began developing The Gender Wheel and published its original incarnation in 2010 in The Gender Now Coloring Book, one of the first books to address transgender and intersex topics with kids. It was rooted in her personal experience as a queer, femme, Xicanx artist/activist/parent having healed from the effects of profound homophobia in her family of origin.

In the beginning, The Wheel had 3 circles and primarily focused on Body and Inside or Gender. When first published in The Gender Now Coloring/Activity Books, the intention was to exponentially expand ideas about bodies and gender and begin blowing the binary apart. For reference and confirmation, The Wheel is then seen in context with nature, global cultures and history to see how it rolls and understand its reach. The center circle meant to designate self later became the Pronoun Circle.